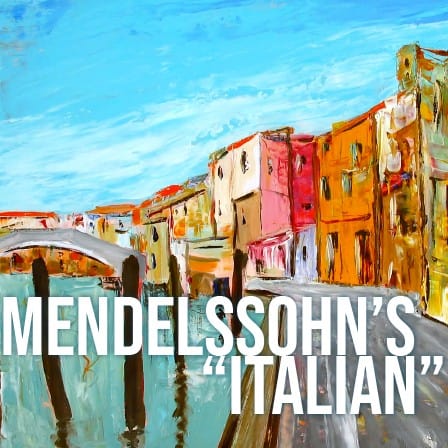 Mendelssohn’s “Italian” Symphony is a musical postcard capturing Mediterranean sunshine, monumental art and architecture, and the beauty of the countryside. He referred to the work as “Blue Sky in A major,” and created an orchestral landscape where audiences can imagine their own characters and stories – a travelogue of Italy, from your seat at the Pikes Peak Center!

Also on the program, Haydn blends the virtuosity of four solo instruments with elegance and intensity in his Sinfonia Concertante. This “concerto within a symphony” features musicians of the Philharmonic in a musical give and take between soloists and orchestra – peaceful, vivacious, and a glorious testament to Haydn’s brilliance.

This vibrant, one-movement work for strings by Jessie Montgomery (b. 1981, New York City) is a perfect vehicle for the composer’s inventive approach and commanding interplay of musical forms. Written in 2012, the exhilarating piece evokes the brilliance of the cosmos and its panoply of glimmering, ever-transforming constellations. It also celebrates the young African American and Latinx musicians of the Detroit-based Sphinx Virtuosi, who she regards as the “new stars in a galaxy” and for whom she originally created this masterwork. Shifting between atonal and melodic themes, Starburst pulsates with a captivating energy.

Violin, cello, oboe, and bassoon solos are featured in this Sinfonia Concertante, composed and premiered in 1792 during Haydn’s first visit to London. A radiant review proclaimed, “[This work] had all his usual grandeur, contrasted by the levity of airy transition and the sudden surprises of abrupt rests.” Listen for artfully arranged solos and ingenious, interweaving themes. The three movements highlight both virtuosity and the spectrum of Haydn’s enduring charm.

Mendelssohn’s “Italian” symphony captures the composer’s youthful exuberance as he explored the country for the first time. In a letter home, he exclaimed, “this is Italy! And now has begun what I have always thought … to be the supreme joy in life. And I am loving it.” The work transitions through major and minor keys, taking the audience on a sonorous journey through light-hearted melodies and somber themes that reflect the young traveler’s impressions and experiences.

Since 1999, Montgomery has been affiliated with The Sphinx Organization, which supports young African-American and Latinx string players. She currently serves as composer-in-residence for the Sphinx Virtuosi, the Organization’s flagship professional touring ensemble. She was a two-time laureate of the annual Sphinx Competition and was awarded a generous MPower grant to assist in the development of her 2016 debut album, Strum: Music for Strings (Azica). In 2019, the New York Philharmonic selected Montgomery as one of the featured composers for its Project 19, which marks the centennial of the ratification of the 19th Amendment granting American women the right to vote.

“This brief one-movement work for string orchestra is a play on imagery of rapidly changing musical colors,” Montgomery writes of Starburst. “Exploding gestures are juxtaposed with gentle fleeting melodies in an attempt to create a multidimensional soundscape. A common definition of a starburst – ‘the rapid formation of large numbers of new stars in a galaxy at a rate high enough to alter the structure of the galaxy significantly’ – lends itself almost literally to the nature of the performing ensemble who premiered the work, the Sphinx Virtuosi, and I wrote the piece with their dynamic in mind.”

In 1761, Joseph Haydn began his 29-year tenure as Prince Esterházy’s court composer at the Prince’s palace outside Vienna, and at Esterház, the Prince’s country estate in Hungary. Always the loyal servant, Haydn had sworn to remain with his lord until one of them died, regardless of what fame and fortune he might receive elsewhere. By the 1780s, however, Haydn began to chafe under his master’s generous but narrow patronage. Haydn’s published music was well known throughout Europe, but he himself was not free to travel, even to nearby Vienna. In 1789 he wrote to a friend there, “Well, here I sit in my wilderness – forsaken – like a poor waif – almost without any human society …”

When Nikolaus Esterházy died in 1790, Haydn, having fulfilled the terms of his service, was free to travel abroad. Soon after Haydn left Esterház, Johann Peter Salomon, a German-born violinist and impresario living in England, invited Haydn to London. Haydn accepted immediately; not long after he landed in London, he wrote his Viennese friend, “My arrival caused a great sensation throughout the whole city and I went the rounds of all the newspapers for three successive days. Everyone wants to know me.” Haydn worked in London for several years, composed some of his best music, including the “London” Symphonies for Salomon’s orchestra, and thoroughly enjoyed both his fame and his appreciative English audiences.

One of Haydn’s former students, composer Ignaz Pleyel, had also recently set up shop in London with a rival ensemble. The two men respected each other’s music and were on friendly terms, but they were also competitors, and the English press played up their rivalry. “Now a bloody harmonious war will commence between master and pupil,” wrote Haydn in a letter. “The newspapers are all full of it, but it seems to me that there will soon be an armistice, because my reputation is so firmly established. Pleyel behaved so modestly towards me on his arrival that he won my affection again.”

Pleyel had built a reputation for his sinfonia concertantes – concertos for orchestra with multiple soloists – which were popular with audiences. Determined to outshine his former pupil, Haydn composed on of his own, for solo violin, solo oboe, solo bassoon, and solo cello with orchestra. The morning after its premiere, the London Morning Herald gave it a rave review: “A new concertante from Haydn combined with all the excellencies of music: it was profound, airy, affecting and original, and the performance was in unison with the merit of the composition.”

In 1830-31, Felix Mendelssohn traveled in Italy, spending most of his time in Rome. While there, Mendelssohn wrote several of his best-known works, including the Italian Symphony. Although widely considered the finest of Mendelssohn’s symphonies, the Italian Symphony failed to please its creator. Even after its auspicious premiere, which Mendelssohn conducted to great acclaim in London, the 24-year-old composer was dissatisfied. Ignaz Moscheles, a close friend of Mendelssohn’s, who attended the premiere, noted in his diary, “Mendelssohn was the outstanding success of the concert; he conducted his magnificent A major Symphony and received rapturous applause.” Nonetheless, soon after the premiere, Mendelssohn began making revisions. He continued tinkering with Op. 90 until his death, and observed that the symphony caused him “some of the bitterest moments I have ever endured.” In the end, Mendelssohn’s dissatisfaction with the Italian Symphony led to his refusal to conduct it again, or permit it to be published during his lifetime.

Mendelssohn’s abiding unhappiness over Op. 90 is puzzling; both Moscheles and Mendelssohn’s sister Fanny, a gifted composer herself, praised its form, artful melodies, and overall grace. Unconvinced, Mendelssohn continued revising it, and left a detailed outline of changes he wanted to make to the first three movements. Four years after Mendelssohn’s death, the Italian Symphony was published, albeit without Mendelssohn’s revisions. Since then, audiences have embraced the work, and it is among Mendelssohn’s most popular and most frequently programmed symphonies.

When recalling his trip to Italy, Mendelssohn said, “The whole country had such a festive air that I felt as if I were a young prince making his entry.” The Allegro vivace reflects the relaxed confidence of a young man on the brink of new adventures, as well as the warmth of the Italian sun, the deep blueness of the sky, and the sunny temperament of the Italian people. The mood of the Andante con moto is more introspective; the melody, in a minor key, is supported by pizzicato strings, which provide a walking bass line suggestive of footsteps. Mendelssohn observed a number of Church rituals during his stay in Rome, and this processional quality suggests the solemn rites of a religious ceremony. With the Con moto moderato, Mendelssohn returns to the warmth of the first movement, taming its exuberance into a graceful minuet, accompanied by a trio of winds and brasses. Mendelssohn titled the final movement a saltarello, after an energetic Italian dance. The rapid-fire theme skips nimbly and without pause through the orchestra, first in the winds, then the strings and brasses. The perpetual-motion quality of this music suggests another Italian dance, the tarantella, named for the mistaken Italian belief that immediate exertion would save the victim of a tarantula’s bite from its deadly poison.