The life of Miguel de Cervantes, the author of Don Quixote, was a litany of disappointments. His left arm was rendered useless by a wound at the Battle of Lepanto in 1570. Five years later he was captured by Ottoman Turks and spent nearly five years as a prisoner. (The “Captive’s Tale” from Part 1 is partly autobiographical.) As a tax collector, raising money for what would be the Spanish Armada, he was jailed at least twice for irregularities. A pastoral novel, La Galatea, was unsuccessful, and his poetry has never been highly regarded. Don Quixote, written when Cervantes was in his late 50s, was his first success – but while the novel’s popularity was immensely gratifying to Cervantes, in those pre-copyright days it hardly made him rich. Cervantes died almost a pauper, a year after finishing Part 2.

In contrast, the novel for which he is remembered has led a charmed existence. In less than a decade after the publication of Part 1 in 1605, it had been translated into several languages, and spawned a work of fan-fiction – known as the False Quixote – that irritated Cervantes enough that he wrote Part 2 in 1615. To squelch the possibility of further derivative works, Cervantes killed off his main character at the end, but it didn’t work: Since 1615 there has been no more influential work of fiction. Don Quixote has inspired thousands of works of literature, music, visual art, theater, dance, and film, ranging from the mainstream (Man of La Mancha) to the bizarre (Jorge Luis Borges’ Pierre Menard, Author of the Quixote).

The False Quixote was merely the first spin-off; and while the author of that work remains unknown, the real Quixote has inspired some of history’s greatest creative artists. The lost Shakespeare play Cardenio was based on an episode from Cervantes. Among novels, besides obviously influenced works such as Henry Fielding’s Joseph Andrews and Laurence Sterne’s Tristram Shandy, there are the thousands of novels that use the literary techniques invented by Cervantes. A short list of Quixote-inspired operas includes Georg Philip Telemann, the teenaged Felix Mendelssohn, Gaetano Donizetti, Jules Massenet, and Manuel de Falla. Among visual artists, Gustave Doré, Honoré Daumier, Pablo Picasso, and Salvador Dali are merely the most famous to have taken Don Quixote as their subject. Here in Colorado Springs, one of the finest works in the Fine Arts Center’s collection is Boardman Robinson’s 1931 Don Quixote and Sancho, created when the renowned muralist was teaching at the Fine Arts Center’s precursor, the Broadmoor Art Academy.

It’s not the story per se. Don Quixote is a rambling, episodic novel, and along with its fans, it’s had its detractors. (Vladimir Nabokov called it “a cruel and crude old book,” which didn’t deter his cousin Nicolas Nabokov from composing the music for George Balanchine’s balletic treatment of the story.) But it’s awesomely original. Cervantes invented a number of novelistic techniques, including the use of multiple narrators, ironic narrators, and a fictional author, the Moorish historian Cide Hamete Benengeli – in English, Mr. Hamid Eggplant – whom Cervantes credits as the true writer.

Its sheer originality cements Don Quixote as a great novel, but there are other reasons for its position as one of the fountainheads of Western literature.

First is the impossibility of pigeonholing either Don Quixote or its author. “You think you’re reading one kind of book, and you’re reading another,” says Cervantes scholar Maria Daniels. It’s simultaneously heroic, pastoral, picaresque, and romantic. Like Chekhov three centuries later, Cervantes reports on his characters but rarely lets us know his opinion of them. This gives a lot of leeway for interpretation, and different generations have taken full advantage of this: Don Quixote has been read as comedy, tragedy, and everything in between. 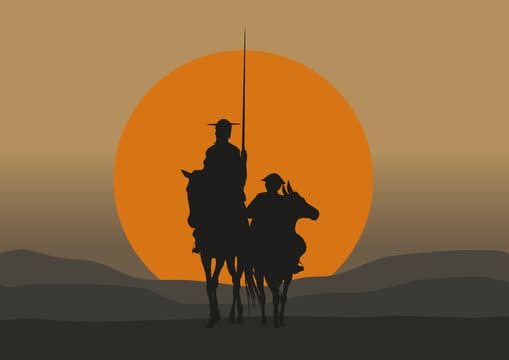 Cervantes’ refusal to take sides paradoxically enabled him to tackle major issues. “Cervantes was acutely sensitive to the social problems of his time, and incorporated them in his books, but made them palatable through humor,” says Daniels. In one passage, the Don’s neighbors pass judgement on the books in his library: “That’s an astounding parody of the Inquisition, and yet it passed censorship.”

Second is the sheer generosity of Cervantes’s spirit. “He takes every aspect of the disappointment of his own life, and includes them in his work, but never loses a sense of wonder,” says Daniels. The range of his life – soldier, tax collector, playwright – had given him deep knowledge of all the classes of Spanish society, and everyone is included: peasants, poets, priests, princes.

And perhaps most importantly, Cervantes gave life to all these characters. In the earthy Sancho Panza, Cervantes created the prototype for the modern comic sidekick. Before Sancho Panza, sidekicks were clever and educated. “But Sancho is a peasant,” says Daniels. “His wit is completely different – the wisdom of the common folk.”

And above all is the timeless question of the relationship between our selves and reality. Cervantes stresses that Don Quixote impresses all those who meet him as a thoroughly intelligent and rational person – aside from the tiny detail of being mad. The far-ranging conversations between Quixote and Sancho Panza are as significant as the adventures.

In this kaleidoscopic world, something from Don Quixote will resonate with you no matter where you lie on the aesthetic spectrum. Between 1898 and 1934, four composers – the Romantic Jules Massenet, the Post-Romantic Richard Strauss, the Neo-Classicist Manuel de Falla, and the Impressionist Maurice Ravel – created important works based on Cervantes’s novel. All four works are colorful, but their sensibilities are completely different.

Don Quixote is anything but a historical relic. Terry Gilliam’s film, The Man Who Killed Don Quixote, was released in 2018, and K-pop band Seventeen has a song about Quixote on their 2022 album, Face the Sun. “There’s always this cosmic forgiveness,” says Daniels. “No matter how many times the world disappoints you, there’s somebody around the corner with a story.”