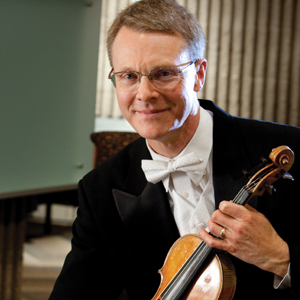 Michael Hanson became concertmaster of the Colorado Springs Symphony in 1992. He has become well known to Colorado Springs audiences for his orchestral leadership, as well as many solo performances, from music of Bach and Vivaldi to that of living composers. He has performed more than 25 concertos with orchestras throughout the west, and recently appeared as a soloist with the Hunan Symphony in Changsha, China.

Hanson was a member of the Oregon Symphony in Portland, the Grant Park Symphony in Chicago, and Concertmaster of the West Coast Chamber Orchestra. High points of orchestral playing outside of Colorado Springs include making music under the batons of
Leonard Bernstein, Seiji Ozawa, Leonard Slatkin, and James dePriest.

Chamber music highlights include many years with the Colorado College Piano Trio, and with principal players of the Montreal Symphony at the Orford Arts Centre in Québec. Summer festivals include Tanglewood, Sunriver, Peter Britt, and Cuchara. Hanson’s principal teachers include Raphael Spiro, Joseph Silverstein, and James Maurer, with additional studies with concertmasters of some of the world’s finest orchestras.

Hanson is committed to passing music on to the next generation through educational activities. He and his wife, Catherine, co-founded the Hanson Music Academy, which brought together Suzuki string teachers and students for group instruction. Hanson later founded the Bristol Suzuki Strings program in Colorado Springs School District 11. He currently teaches orchestra at Thomas MacLaren School. Hanson’s private students have gone on to study at the finest U.S. music schools and conservatories.