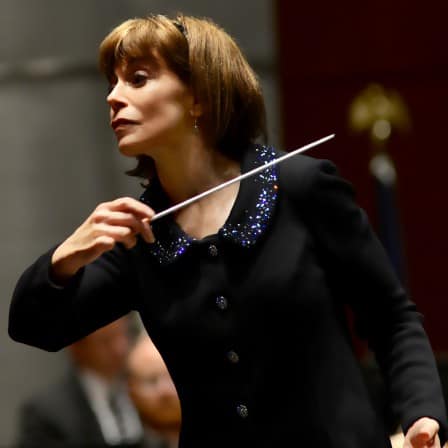 The finale to the Philharmonic’s Comeback Season will be a memorable event!  JoAnn Falletta leads the Philharmonic in a program that is both timeless and current. The program includes Mozart’s “Haffner” Symphony, Copland’s Appalachian Spring, and new voices – featuring Korean artist Ji Su Jung on marimba and a resounding conclusion to our comeback year with Puerto Rican composer Roberto Sierra’s Fandangos.

During the summer of 1782, 26-year-old Wolfgang Amadeus Mozart was juggling several projects at once. The previous year, he had left his hometown and his unappreciative employer, the Archbishop of Salzburg, to settle in Vienna. Mozart’s opera The Abduction from the Seraglio had premiered on July 16, 1782; just after the opera began its run, Mozart started making an arrangement of the opera’s music for wind ensemble –  “otherwise someone will beat me to it and get the profits,” as he explained in a letter to his father Leopold. Mozart was also preparing for his upcoming marriage to Constanze Weber, his landlady’s daughter. In the midst of all this activity, Leopold wrote Mozart requesting some celebratory music for the occasion of the ennoblement of Sigmund Haffner, a Salzburg friend whom Mozart had known since childhood. “I am up to my eyes in work,” Mozart replied. “And now you ask me to write a new symphony too! … Well, I must just spend the night over it, for that is the only way; and for you, dearest father, I’ll make the sacrifice. You may rely on having something from me by every post. I shall work as fast as possible and, as far as haste permits, I shall write something good.” Mozart sent the Haffner symphony to Leopold in Salzburg in early August 1782.

In 1783, Mozart asked Leopold to return the Haffner score, so Mozart could perform it on one of his Viennese subscription concerts. Afterwards, Mozart wrote to Leopold, “The theatre could not have been more crowded and … every box was full. But what pleased me most of all was that His Majesty the Emperor was present and, goodness! – how delighted he was and how he applauded me!”

The music begins with a full-bodied rhythmic unison theme that leaps up an octave, punctuated by delicate grace notes in the strings and unexpected pauses. This unusual theme dominates the entire first movement. Mozart broke with the convention of his time in this movement by omitting a contrasting second theme. The Andante and Menuetto display the aristocratic grace of Mozart’s style and simultaneously pay tribute the newly established nobility of Haffner. We can imagine the guests at Haffner’s celebration dancing to the lively Menuetto, which contrasts a hearty booming phrase played by the full orchestra, including trumpets and timpani, with a gentle response by the strings alone.

For the Presto, Mozart borrowed a tune from his opera, The Abduction from the Seraglio. Mozart indicates this movement should “go as fast as possible,” and its lively energy echoes the words of the original tune, “Ha What triumph will be mine now!” as sung by Osmin, the gatekeeper of the seraglio (harem). Mozart may have intended the selection of this music as a message to Haffner who “triumphed” in his quest for nobility, or perhaps as a snub to his former boss back in Salzburg.

Winner of the 2012 Pulitzer Prize for his debut opera Silent Night, Kevin Puts has been hailed as one of the most important composers of his generation. Critically acclaimed for a richly colored, harmonic, and freshly melodic musical voice that has also been described as “emotional, compelling, and relevant,” his works, which include several operas, four symphonies, and several concertos, have been commissioned, performed, and recorded by leading orchestras, ensembles and soloists throughout the world. Recent projects include a February 2022 world premiere of the concert version of Puts’ opera The Hours, based on the book and film of the same name, featuring soprano Renée Fleming.

Puts writes, “Marimba Concerto reflects my love of Mozart’s piano concertos, works with instrumentation similar to that of this concerto, i.e. a keyboard instrument with chamber orchestra. I decided to write a piece which is lyrical throughout and to feature the marimba in both melodic and ornamental roles. The influence of Mozart lies mainly in the relationship between the soloist and orchestra, one of near equality in which the marimba continually interacts with the instruments of the orchestra.

“The work is comprised of three movements – fast, slow, fast – like a Mozart concerto, and each movement bears a subtitle taken from the poetry of my aunt, Fleda Brown. They are: I. “… terrific sun on the brink” (Flowing); II. “… into the quick of losses” (Broad and Deliberate); and III. “… logarithms, exponents, the damnedest of metaphors” (Presto non troppo). The overriding message is one of optimism and exuberance.”

Shortly before the debut of Ballet for Martha, Aaron Copland’s working title for the ballet Martha Graham had commissioned from him, the choreographer announced she had decided on the name Appalachian Spring. Graham, who borrowed the words from Hart Crane’s poem, The Dance, admitted she had chosen it simply because she liked the sound of the words together, and that it had no connection with either the location or scenario of the ballet. “Over and over again,” Copland recalled in 1981, “people come up to me after seeing the ballet on stage and say, ‘Mr. Copland, when I see that ballet and when I hear your music I can just see the Appalachians and I just feel spring.’ Well, I’m willing if they are!”

In Appalachian Spring, Copland’s affinity for folk melodies and idioms reaches its zenith. The Shaker hymn “Simple Gifts,” which Copland discovered in a 1940 book on Shaker culture, and the celebratory variations of its melody, form the climax of Appalachian Spring. When Copland arranged Appalachian Spring as an orchestral suite, he emphasized the song’s centrality by cutting several episodes from the ballet and changing the order of the variations. As scholar William Brooks notes, “In this context the Shaker melody came to serve as a kind of paradigm for the simplicity and authenticity of frontier America: mythical music for a mythical past.” In similar fashion Copland’s music, particularly Appalachian Spring, became the paradigm for the “American” sound of the mid-20th century.

Copland explained his musical conception: “When I wrote Appalachian Spring, I was thinking primarily about Martha and her unique choreographic style, which I knew well.  Nobody else seems quite like Martha: she’s so proud, so very much herself.  And she’s unquestionably very American: there something prim and restrained, simple yet strong about her, which one tends to think of as American.”

Edwin Denby, a noted dance critic, provided program notes for the premiere of the Appalachian Spring orchestral suite in 1945: “A pioneer celebration in spring around a newly-built farmhouse in the Pennsylvania hills in the early part of the last century. The bride-to-be and the young farmer-husband enact the emotions, joyful and apprehensive, that their new domestic partnership invites. An older neighbor suggests now and then the rocky confidence of experience. A revivalist and his followers remind the new householders of the strange and terrible aspects of human fate. At the end the couple are left quiet and strong in their new house.”

For more than three decades, the music of Roberto Sierra has been performed by many of the leading orchestras, ensembles, and festivals in the USA and Europe. Sierra’s music, which fuses European orchestral traditions with the vigorous energy of Caribbean rhythms and sonorities, has garnered a number of awards, including the International Composers Competition of the Budapest Spring Festival and the American Academy of Arts and Letters. In 2008, Sierra was a Pulitzer Prize finalist for his Viola Concerto, and in 2017 he received the Tomás Luis de Victoria Prize, the highest honor given in Spain to a composer of Spanish or Latin American origin.

At the inaugural concert of the 2002 Proms Concerts in London, Sierra’s Fandangos was performed by the BBC Symphony Orchestra in a concert that was broadcast by both the BBC Radio and Television throughout the UK and Europe. This performance helped make Fandangos Sierra’s most-performed work.

The fandango’s origins lie in both the Old and New Worlds. Conquistadores returning to Spain from the Americas in the early 1700s are credited with introducing this lively partner dance, with its musical inflections borrowed from the music and dance traditions of indigenous peoples of the New World, to Europe. Over time, the fandango evolved from a popular street dance into concert music for the aristocracy. Starting in the 18th century, fandangos became well known in classical circles, as composers such as Gluck, Mozart, and Boccherini incorporated them into operas, or as stand-alone works.

Sierra’s Fandangos was inspired by the eponymous keyboard sonata by Padre Antonio Soler, an 18th century Spanish composer. “Soler’s ‘Fandango’ [is fascinating] for its strange and whimsical twists and turns,” Sierra observes. “My Fandangos is a fantasy, or a ‘super-fantasy,’ that takes as its point of departure Soler’s work and incorporates elements of Boccherini’s ‘Fandango’ [along with] my own Baroque musings … I bring [the fandango] to the present through some transformations of the musical fabric. When we are hearing something that may sound Baroque, a window into our time opens, and the piece is transformed. My title Fandangos (in plural) refers to the multidimensionality of the work.”