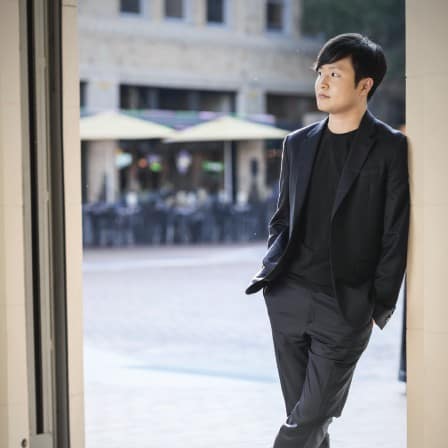 Scott Ordway In the Kingdom of Bells

Brahms Variations on a Theme by Haydn

Music Director Josep Caballé-Domenech and the Philharmonic return to the stage with a musical celebration that spans the range of human experience to welcome audiences back for the first Masterworks performance of 2022. Legendary for its fiery technical difficulty and adored for its romantic melodies, “Rach 3” is a monumental close to the Comeback Celebration program — performed by dazzling Van Cliburn Gold Medalist Yekwon Sunwoo. An unforgettable way to open the season!

Comments from the composer:

“In the Kingdom of Bells is a meditation on a simple, but fantastical idea: I imagine the sound of all the world’s bells ringing at once.

I think about what might bring this about: something supernatural, perhaps? An unseen force calling bells large and small to life in the course of a single, glorious hour. Or, alternatively, some occasion of such overwhelming and universal joy that we, the community of humanity, organize a global festival of bells as the only commensurate response.

I think about an ordinary action—like ringing a bell—that becomes unusual when practiced at a group scale, improbable at a city scale, extraordinary at a national scale, and miraculous at a global scale. I celebrate the ways we find to touch a small and simple piece of something immeasurably vast, like setting fingers on the surface of the sea, as well as how we look at something plain and make it magical by dramatically reimagining the possibilities that inhere in it.

These metaphors extend to, infuse, and define my creative language, which uses music’s most humble elements to build large architectural forms. These metaphors offered both the point of inspiration for and the means to compose In the Kingdom of Bells.

The piece does not recreate the sonic phenomenon that I imagine—no music ever could—but instead dwells briefly in the emotional world that might accompany such a profound act of human invention and cooperation.”

In the autumn of 1870, Carl Ferdinand Pohl, a scholar working on a biography of Joseph Haydn, showed his friend Johannes Brahms an unpublished score for a wind ensemble Haydn had composed sometime around 1782. The second movement was titled “St. Anthony Chorale.”

The source of this melody remains a mystery, but scholars have definitively established Haydn did not write it (nor, as it happens, did Haydn compose the wind ensemble Pohl discovered, either). Some historians suggest the St. Anthony melody originated in the state of Burgenland, in eastern Austria, or that it was a popular religious melody sung on the Feast Day of St. Anthony of Padua. Others credit Haydn’s student, Ignaz Pleyel, with authorship.

Brahms decided to use the St. Anthony Chorale as an exercise in orchestration, to hone his compositional skills as he also worked on his first symphony. For Brahms, this expansive tune with its odd five-measure phrases was ideally suited to the theme with variations format with which he was quite familiar. Between 1854 and 1863, Brahms had composed variations on themes of Robert Schumann, George Frideric Handel, and Niccolò Paganini, all for piano. Interestingly, although the theme and variations genre is a staple of solo piano repertoire, orchestral variations like these were virtually nonexistent prior to 1873.

Theme and variation allows for a variety of compositional approaches, ranging from simple to florid. In a letter to his friend, violinist Joseph Joachim, Brahms opined, “I sometimes ponder on variation form, and it seems to me it ought to be more restrained, purer. Composers in the old days used to keep strictly to the base of the theme as their real subject … But it seems to me that a great many moderns (including both of us) are more inclined – I don’t know how to put it – to fuss about with the theme. We cling nervously to the melody, but we don’t handle it freely, we don’t really make anything new out of it, we merely overload it. And so the melody becomes quite unrecognizable.”

Brahms began with a simple statement of the St. Anthony melody followed by eight variations and a powerful finale. The variations alternate between rich harmonic explorations – venturing into minor keys on occasion – and expansions of the melody’s innate majestic qualities. The closing variation is a magnificent passacaglia, a Baroque form of variations on the chorale’s bass line. Essentially a set of variations within the variations, the finale serves as Brahms’ musical wink to the contrapuntal and puzzle-loving style of J. S. Bach.

The musically conservative critic Eduard Hanslick, a fan of Brahms’ music, wrote an encouraging, if flowery, review of the first performance in Vienna: “Brahms seems to us now like a robust tree standing in full sap, whose green branches are stretching ever higher and wider, bearing ever more abundant, sweeter fruits.”

Sergei Rachmaninoff began working on the Third Piano Concerto in the summer of 1908 at his family’s estate at Oneg, and rushed to complete it in time for his first tour of North America, in the fall of 1909. On the voyage to the United States, Rachmaninoff had no access to a piano, so he took along a cardboard keyboard to practice and memorize the demanding solo part.

After the premiere, and a second performance in New York led by Gustav Mahler, Rachmaninoff arrived in Boston. He made such a magnificent impression that he was asked to assume the post of Music Director for the Boston Symphony Orchestra, an offer he declined. Despite his success, Rachmaninoff heartily disliked America. In a letter to his cousin Rachmaninoff wrote, “In this accursed country you’re surrounded by nothing but Americans and their ‘business,’ ‘business’ they are forever doing, clutching you from all sides and driving you on. Everyone is nice and kind to me, but I am horribly bored by the whole thing, and I feel that my character has been quite ruined here.” Lonely and homesick, Rachmaninoff returned to Russia in February 1910.

The extraordinary virtuosic and musical demands of the Third Concerto make it one the most challenging works in the repertoire. The soloist plays almost constantly throughout, and must combine ear-popping virtuosity with a chamber musician’s collaborative ability to listen and blend into the orchestra.

When Rachmaninoff discussed the thematic origins of the Third Concerto, he denied any specific influences. “It is borrowed neither from folk song forms nor from church services. It simply ‘wrote itself,’” he stated about the primary melody, in which the pianist enters, subdued, underneath the orchestra. “If I had any plan in composing this theme, I was thinking only of sound. I wanted to ‘sing’ the melody on the piano, as a singer would sing it – and to find a suitable orchestral accompaniment, or rather one that would not muffle this singing.” Rachmaninoff no doubt sincerely believed the theme was his creation, but every composer’s music derives from a collection of influences assimilated, often unconsciously, over the course of a lifetime. With regard to the melody in question, scholars have found strikingly similar music in monastic chants from the Russian Orthodox liturgy. which Rachmaninoff heard regularly as a child.

The Intermezzo and Finale are played without pause, an abrupt transition from the reflective melancholy of the second movement to the ferocious virtuosity of the Finale.

© Elizabeth Schwartz
Elizabeth Schwartz is a freelance writer, musician, and music historian based in Portland, Oregon. In addition to annotating programs for the Oregon Symphony, Chamber Music Northwest, and other performing arts organizations across the country, she has contributed to the nationally syndicated radio program “Performance Today,” produced by American Public Media. http://classicalmusicprogramnotes.com